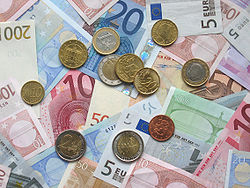 In ancient Greece agora, like the Roman forum, was the ideal meeting place to talk politics.
Our 4 and 5-graders join «agora» to discuss the future of the euro.

EURO OUT!
By Alessandro and Filippo

In our opinion Italy should choose to be Euro out like the UK.
We think it would be better like this because in that way Italy’s finances wouldn’t be influenced by the crisis of other countries like Greece.
We, Italians, would then be the only reason of our economic growth or downgrade and so it would be easier for us to sort out the problem of our huge public debt.
Another reason to leave the Eurozone is that prices went up when the common currency was introduced.
The situation we are in, right now, is partially due to the euro crisis but, obviously, it’s not the only reason because we’re in a global crisis that started as a financial crisis in the US in 2008 and now it’s impacting the economy of most European countries.
Regarding Italian economy the situation is quite complex considering that we have a huge sovereign debt (greater than our GDP) and the real economy is not growing, with increasing unemployment especially among younger people and in the south of Italy.
At present our Government is trying to define and apply measures to allow our country to overcome financial instability and to restart our economic growth.

I’m still undecided about the opportunity for Italy to remain a euro country. The past few months have proved how the European Union is still fragile and I’m worried about what would happen if Italy decided to leave The Union. The global financial crisis has put to the test the structures of our countries and the entire world is trying to fight back the biggest economic depression since 1929. From the economical point of view I still believe that  the best solution is staying in the Union at present, but  in my personal opinion there are some key-points of the euro-project that won’t make Italy a better country. First of all I think cosmopolitanism will destroy the different cultural identities. Making Europe one big country will mean using only one language and as a consequence we will lose the plurality of the languages spoken today, along with national costumes and traditions. I appreciate the European intervention since it’s limited to the economic sphere but I still believe in the value of the self-determination of nations.

I remain undecided, too, because if we opt out, the European Union would be divided, the European market would be difficult to access and with the loss of the single currency all the member states of the Union would lose confidence in each other. On the other hand  it is true that the European  crisis is especially due to the bankruptcy of some European countries like Greece an Portugal. In this hard situation all the governments have to introduce economic reforms to save the European and international balance.

EURO IN!
By Danio

Now the best choice for our country is probably to stay in the European Union. Even though the euro is one of the reasons of our crisis we need to stay in the E.U. Otherwise I can’t imagine a future of progress for the Italian economy. Alone we couldn’t withstand the competition of the new economic powers like China. However, the situation is dramatic for the E.U. and it will get worse… after Portugal and Greece we could be the next to fail, and  Italy’s bankruptcy would be much more dangerous for  Europe than  Greece’s; but leaving the eurozone is not the solution! Let’s suppose that Italy would leave the euro and go back to the lira: the exchange rate would probably be 1 to 1, which means that the salaries would decrease. Also, the import would become more expensive. I think that, even if leaving the Euro could help us to survive the crisis, that’s not the right decision  for our future.

EURO IN!
By Nicole

I am “euro in” because Italy would have failed if it hadn’t been in the European Union. Italy is deep in debt and it is likely to go bankrupt soon. In fact Italy has one of the largest sovereign debts in the world and markets are worried it may be the next victim in the spreading eurozone debt crisis due to its poor economic growth and domestic political tension. The monetary policy of the European  Union is making a rescue operation, buying the Italian public debt.

EURO IN!
By Riccardo

I think that Italy should remain within  “Euroland” because losing a stable currency like the euro  would be a disaster. The old “lira” would be depreciated giving citizens less purchasing power. The solution is to stay in the Eurozone. So, let’s get rid of incompetent politicians and keep up the European Union looking not only at eurobonds but at setting up a true united Europe, with a common fiscal and economical policy.

IN VIAGGIO PER RICORDARE

Three students from 4 A discuss a topical issue. Alessandro Di Muzio “Venetism” is a name given by the media to a set of organizations, political parties and people connected with local Venetian things. It includes both the movement that asks for more autonomy for the region and the movement that wants the independence of […]