Alessandro Libonati, 5A PNI, reports on a Bruno event. 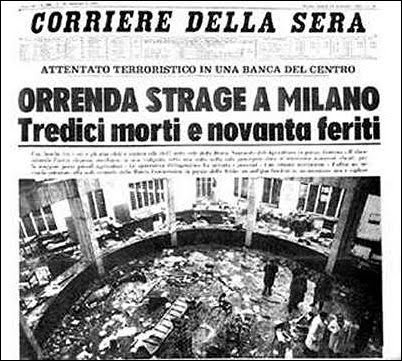 A few days ago my class and I attended a lecture organized in the conference room of our school. Mr Maurizio Dianese and Mr Guido Lorenzon talked about about the Piazza Fontana bombing, a terror attack that occurred in Italy in the late sixties.

The former is a journalist, who spent a lot of years to investigate about the massacre, while the latter, a teacher, was a witness who gave the police a clue that the terrorist bombing might be the responsibility of  Neo-Fascist exponents that were based in Veneto region.

The Piazza Fontana bombing occurred at 16:37 of December 12th, 1969 when a bomb exploded in a branch of Banca Nazionale dell’Agricoltura, a bank located in Piazza Fontana, a square in the centre of Milan, killing 17 people and wounding 88.

The massacre was initially blamed to Anarchists; the police arrested 80 people and a dancer, Pietro Valpreda, was accused of being the executor of the bombing and he was sent to prison, while another anarchist, Pino Pinelli, died falling down from a window of the Police Station during an interrogation. His death inspired the play Accidental Death of an Anarchist staged by Noble Prize winner Dario Fo in 1970.

Mr Lorenzon, who used to teach in a school in Maserada sul Piave near Treviso, went to  public prosecutor Piero Calogero, and he witnessed that the massacre was not responsibility of the Anarchists but of Neo-Fascists living in the Veneto region, namely Giovanni Ventura and Franco Freda. In fact, he knew this for sure, because Ventura himself told him that he was involved in the massacre, but Lorenzon could not provide any evidence of this and he was unable to prove to the prosecutor that he was telling the truth. So a meeting with Ventura was organized with Lorenzon wearing a hidden recorder. During a long conversation he obtained a new confession from Ventura but, when he came back to the magistrate, he found out that the recorder was out of order. It did not look like an accidental malfunctioning but like someone didn’t want to prove that Neo-Fascists were involved in the massacre.

However, other attempts to obtain a confession were made and eventually the police had the proof that he was telling the truth. On March 3rd, 1972, Freda, his friend Ventura and Pino Rauti, the founder of the far right movement Ordine Nuovo, were arrested.

They were charged of having planned and executed the April 25th,1969 terrorist attacks on the Milan Fair and Railway Station, and of several other attacks on trains carried out on 8th and 9th August of the same year.

Freda and Ventura were later accused of involvement in the Piazza Fontana bombing.

In the end, however, after going through very long trials, they were acquitted of the crime in 1985.

Even though in 1990 the investigators claimed that, due to new witnesses, they had evidence that Freda and Ventura were involved in the terrorist attack, according to the Italian law they cannot be put on trial  for the same crime again.

As of today, the criminals that did this terrible crime have not been condemned and the victims are still waiting for justice.

10th February: National Memorial Day of the Exiles and the Foibe

by Arianna De Luca 3A On Saturday 7th February my class and I had a second opportunity to meet Mr Zanin, who talked about the National Memorial Day of the Exiles and the Foibe that in Italy was established on the 10th day of February with the law 92 of 30 March 2004, in memory […]