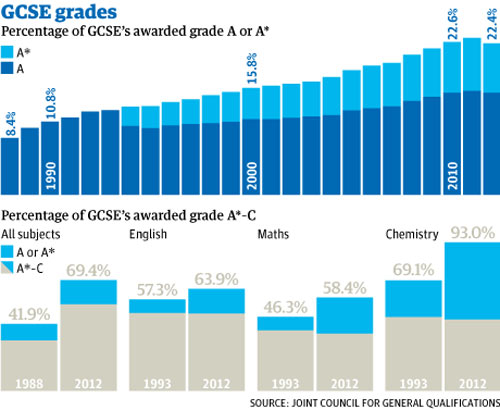 by Elisabetta Binetti 2A

In the United Kingdom children from 4 to 7 attend primary school and from 7 to 11 attend junior school: at the end of each cycle they don’t get any qualifications.

After that, students attend the secondary school. When they are 16 they have an exam to get GCSE (General Certificate of Secondary Education). Unlike our State Exam at the end of High School, GCSE consists of ten tests about ten different subjects: five of them are compulsory, like Maths or English Literature, but five are chosen by the students.

In Italy it isn’t possible because the Ministry of Education (MIUR) or the Board of Examiners on “Terza Prova”) decides the kind of test and we can only choose how to open the oral interview by choosing a topic.

When they are 16, students attend the 6th form college and when they are 18 they obtain a qualification, whose name is “A Levels” where A means “advanced”. They have to take four exams but they can choose their subjects. Exams marks are graded from A to E (A is the best), but they are evaluated by an external examination board; so if the students aren’t happy with their marks, they won’t complain about them at school. The results of those exams are very important to apply to University: for example, a student who gets AAAA at the end of his exams can apply for Oxford which is one of the best Universities in Britain as well as in Europe or in the whole world.

After University, English boys and girls often take a gap year and they sometimes decide to go abroad to make new experiences.

After that, they can apply for a “master” degree (MSc, Master of Science) and, if they want to be called “Doctor”, they have to take a Doctorate in Philosophy (PhD, Philosophy Doctor).

There are many differences between the British and the Italian school system: for example, in Italy marks are numbers from 1 to 10 (ten out of ten is the best, six out of ten is “pass” and four out of ten or below is total failure).

We finish High School when we are 19, a year older than European students. Very few of us go abroad on a gap year, also because most families don’t have so much money to support them and it isn’t easy to get a grant or a proper job.