One of my biggest surprises of 2019 has to be how hard I’ve fallen for Greece!
Everywhere in Greece (minus the Athens city’s center) was fabulous and gorgeous. Every time I stepped foot in a new place, my jaw dropped open and I got that tight feeling in my chest when I know I am lucky enough to be witnessing something spectacular – know what I mean?
Now that I am huddling by the heater in my apartment in Venice, I figured it was high time for some sunshine and beautiful views from this trip.
Here are the views in Greece that blew my mind

• Following the paths of monks towards Meteora
If there was one place I was looking forward to the most this winter, it was visiting Meteora in central Greece. From what I’ve heard, this huge Eastern Orthodox monastic complex was unlike anywhere else in the world – and given just how overused that phrase is nowadays, I was hoping it would ring true. I wasn’t wrong.
If the unearthly landscape of massive pillar-like mountains and columns weren’t striking enough, monks went ahead and built huge monasteries on
top of them 500 years ago. 6 of them are still working
monasteries nowadays and are open to the public if you are willing to make the trek up to them. Trust me, it’s worth.
A view from Meteora is spectacular no matter where you stand, and it will make even the most seasoned traveler say “wow” out loud. In fact, I have about 600 photos from a few hours exploring there to prove it.
While Greece is full of beautiful vistas and spectacular sites, you’d be hard-pressed to find one more unique and with so many fabulous views as you get in Meteora.

• Communing with the Gods at Delphi
Being the massive nerd that I am, and the fact that I have studied for five years Ancient Greek culture, a trip to Greece would be incomplete for me without stopping in Delphi.
The center of the ancient world and supposedly discovered by Zeus, Delphi later became the hub for worshipers of the god Apollo, and where the famous oracle of Delphi dwelled.
Visiting the museum is a marvelous experience, inside it you can find some of the most important antiquities of the Ancient Greece, such as the Heniokhos (Charioteer of Delphi) or the impressive “kuroi” Kleobis and Biton.
Delphi is a great location in Greece with great views from just about anywhere and it’s also the place where you can feel the spiritual devotion of the Ancient Greeks. I’m converted. I’ll go back anytime. 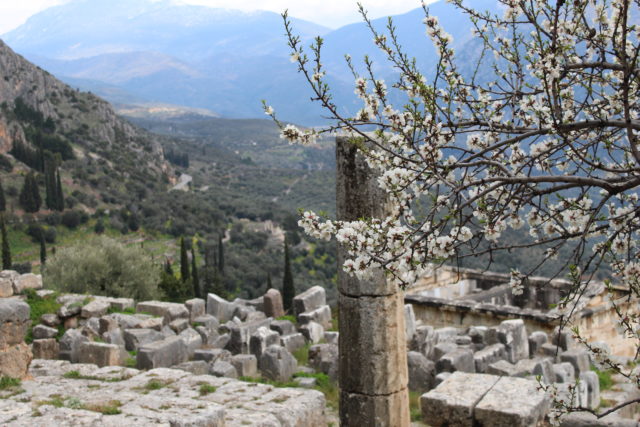 • Feeling the Orthodox faith at Hosios Loukas
Hoping to squeeze in one more monastic complex in Greece before departing, I had heard about the beauty of Hosios Loukas.
It was a rainy day and I was coming back from Delphi to Athens; situated on a remote picturesque hilltop below Mt. Elikonas, the Monastery of Hosios Lukas is among the most important Byzantine architectural monuments extant.
The main church will make you gasp as you enter with its Italianate marble walls and fantastic golden mosaid frescoes on the ceilings. 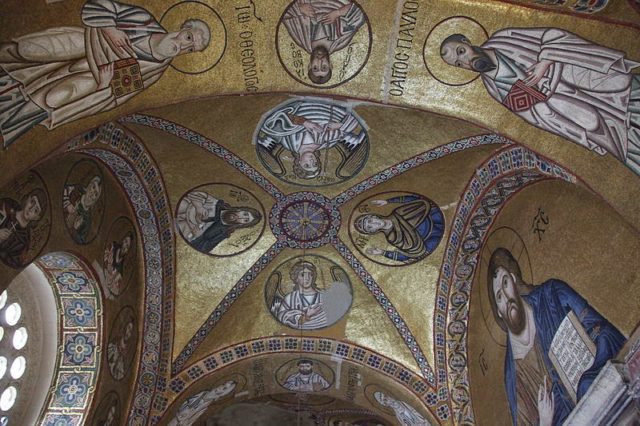 • Living the Greece’s crisis in Athens
While in general I might not have fallen in love with Athens, I did realize I need to go back and give it a second chance.
Exploring the Acropolis, the place I have studied and read about for as long as I can remember, was incredible. Acropolis’ iconic Parthenon and the demure robed maidens (Caryatids) supporting the roof of the Erechtheion temple alongside made me
relived the moments when two years ago I studied these monuments in Art History.
The modern, vast Acropolis Museum sits just below, and beautifully protects the site’s artefacts while placing them in context.
During my free time in the afternoon, I walked around ancient Athens, browsing through the bric-a-brac in the daily Monastiraki Flea Market. Shoulder-to-shoulder shops and kiosks hawk a riot of souvenirs, clothes, leather goods, jewelry and burnished antiques. Nearby Plaka reminded me of Santorini’s paths with their stairways, this district is infact a warren of historic streets jammed with souvenir shops.
However, spending time in Athens made me understand the serious effects of 2008’s economic crisis. The city’s center is full of abandoned buildings (some of them are even not finished!!!) and you can see homeless people at every corner of the streets.
And despite recent talk of Athens being “the new Berlin,” the city still struggles with poverty, riots and drug crime, not to mention continued reverberations of the refugee crisis. 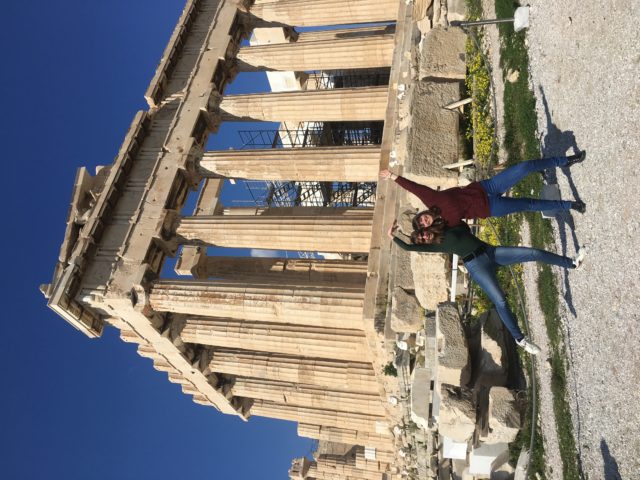 • Imagining to watch an Euripides‘ tragedy in the Ancient Theatre of Epidaurus
Located on the fertile Argolid plain of the east Peloponnese in and blessed with a mild climate and natural springs, among all ancient theatres, the
theatre at Epidaurus is the most beautiful and best preserved.
The theatre is a unique architectural achievement through its admirable integration into the site as well as the perfection of its proportions and acoustics.
The sound quality of the theatre is stunning, even if I was sitting at the top of the hill (where the theatre is located), I was able to hear the touristic guide clapping her hands.

• Breathing the mythological atmosphere of Mycenae
According to mythology, this was the town of the legendary king Agamemnon, the leader of the Greeks during the Trojan War. This place was also the setting of many myths in ancient Greek tragedies, especially the tragedies connected to Agamemnon and his family. This magical atmosphere really inspired me and I was just wondering about coming
through the Lion Gate while Agamemnon’s wife Clitemnestra was killing him.
Very emotional is the Treasury of Atreus, dating
back to around 1300 BC, this is the finest existing example of a domed tholos (Mycenaean tomb shaped like a beehive). It’s wonderfully misnamed, since it has little to do with the mythical Atreus, or with his equally mythical son, Agamemnon, but the interior is truly awe-inspiring, with a 40m-long passage leading to the vast beehive-shaped chamber. Spot the original bronze nails that once held the door in place. 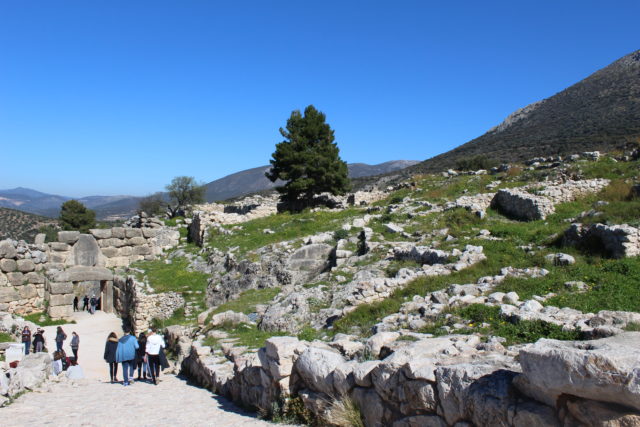 Ps.
A special mention of our guide Krissa, who has made this journey amazing with her passion for Greek culture and I wish also to thank our bus driver Alessandro.

Because in the end, you won’t remember the time you spent working in the office or mowing your lawn. Climb that goddamn mountain.
(On the Road, Jack Kerouac)

Interview with John-Henry Till, Bruno’s youngest lettore this year John-Henry Till Brunovox:1st time in Italy? John-Henry: 2nd time. I was in Parma on Erasmus (good for making international friends, going out with Italian girls, getting to know their families…) not a real academic improvement at Conservatorio Arrigo Boito in spite of Verdi and  Parma’s reputation… […]

PRIDE AND PREJUDICE AT TEATRO CORSO

Theatrical review by Lorenzo Sancassani 4A On the 7th of October my classmates and I, together with hundreds of other students from different schools, attended at the PALKETTOSTAGE performance of Jane Austen’s novel Pride and Prejudice at Teatro Corso in Mestre. Pride and Prejudice is a novel of manners, based on dialogues, which can be […]