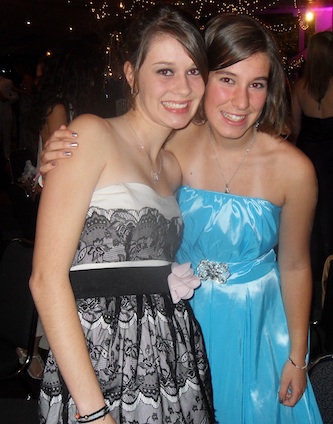 Here in New Zealand I’m having a lot of fun, even though I have to go to school! School is so different here, I can’t say if it’s easier or harder, because it’s just so different!
I’m attending year 12 at Takapuna Grammar School, which is one of the best school in the North Shore. The school is huge! I got lost so many times! But now I know where I have to go! The school year is divided into terms, there are 4 terms and between each term there are two weeks of holidays! Now it’s term 3 and it will end in one three weeks. At the end of term for kiwi students from years 11, 12 and 13 have the externals, national exams. During the year they have a tot number of internals (tests) for every subject and they earn credits, which they need for University. There are only 4 grades:

8.45-9.00: Form Period. During this period, which is always in the same form class, the teacher mark our presence and read to us the daily notices; sometimes during form period there’s or year 12 assembly or house assembly. At school we’re divided into 4 houses (just like in Harry Potter) and once a term there is a house challenge! My house is the blu one and it’s called Arawa (which is the maori canoe), unfortunately my house is last! But we still have some time to become 3rd!

On Wednesday school starts at 9.45, and there’s no school on Saturday! I take 6 subjects, so every day I have all of them except for one (and except for two on Wednesday). In year 13 (the last year) they can drop one subject and get a Study Period. I take:
English which is compulsory until year 13 (a lot of people drop English in year 13). Since I’ve been here we read a book, To kill a mockingbird by Harper Lee, and we wrote an essay about it, and we’ve practiced in analyzing Unfamiliar texts. In the English exam they have to write 3 essays (one about the book we read and two about other short texts) and they have to analyze some unfamiliar texts. English is very hard also for kiwi students! Everybody is worried about the English exam.
French which isn’t that difficult, but at the beginning it was very confusing because I have to translate it into English! Not into Italian! However now I got used to it! And i really enjoy French classes!
Maths, it’s pretty easy, they use a lot the graphic calculator (which Miss Gruarin has forbidden!), but it’s very different from the Maths we study in Italy, it’s more practical.
History, I’m studying the Vietnam war at the moment: they study just a few topics, but they study them very well and accurately.

Hospitality, where I’m learning how to cook and serve in a restaurant, it’s a funny and easy subject! I was interested in trying subjects I don’t take in Italy!
Tourism which is very interesting! I’m learning a lot about NZ geography and touristic places! I think it is one of the most useful subject for an exchange student, at least I learn something about New Zealand!
This is pretty much it about the school! I travelled a bit around New Zealand, I went to the South Island and to Rotorua, which is a natural thermal reserve: the landscapes are astonishing!
At the end of term 2 there was the school ball!! It was awesome! Just like a movie! Here everything is amazing! And the life is so relaxed! They don’t have the stress we have in Europe, and this is one of the main reasons why a lot of people from Europe move here, my host family is English, they moved here 7 years ago and they told me they had been very lucky to find the opportunity to come here. They are simply lovely! I have three host siblings: Harriet (14 years old), Jacob (12 years old) and Charlotte (5 years old). Charlotte is very lively and I never get bored when I’m at home! At the moment my host parents are in Beijing because my host mother is competing in the Triathlon world Championship.
Talking about World Championship, here the Rugby World Cup has just begun! On Friday I watched the fireworks of the Opening Ceremony: they were amazing! Everybody here is very excited about it! I won’t go to any of the games, but I’ve already seen the All Blacks playing, I went to New Zealand vs Australia during the TriNation Tournament: the match was awesome! And I saw the Haka!
I hope my English is improving, I try to read books only in English, and I write down all the vocabs I don’t know. The New Zealand accent is very strange (they can’t say the i, for example to say Fish and Chips they say Fush and Chups!) and they have a typical way to say “good” or “alright”, they say “sweet” or “sweet as”.

AMERICAN AMBASSADORS FROM PEOPLE TO PEOPLE ON HOLIDAY IN MESTRE By Caterina Zardo and Maria Giovanna Caranfa 2E Last June two American girls came to Italy to stay two days in our houses. They were student ambassadors from the People to People home stay project. The two girls were called: Taylor and Jade, they were […]

by Elisabetta Binetti 2A In the United Kingdom children from 4 to 7 attend primary school and from 7 to 11 attend junior school: at the end of each cycle they don’t get any qualifications. After that, students attend the secondary school. When they are 16 they have an exam to get GCSE (General Certificate […]