Rainbow Experience is the name of the project that took me to South Africa. The twinning with Camps Bay High School was an opportunity to visit of Robben Island, Nelson Mandela’s prison. It is located on an island in the Table Bay in front of Cape Town. The original Afrikaans name is “Robbeneiland” seal island because fact when the first Europeans went to the island there were a lot of seals. At the end of the XVII century the European settlers made it a prison. Then from 1836 to 1931 the island had a hospital where lepers were sent into isolation. Today the place is mainly known as the prison where the people who were against the institution of the Apartheid were sent. Apartheid was established in 1954 by the National Party. In that period South Africa had already become independent from Great Britain. The Apartheid was a system of strict racial segregation against black people. For example they were not allowed to live in the same place where the white people lived, or marry white people. All the citizens were recorded on the basis of racial characteristics and in the social ladder the most important people were always the whites, next the coloured and at the end the blacks. It was a terrible system. So all the people who were against it were sent to Robben Island. We went there by boat and when we arrived we had a tour on a bus. We saw the little town where the island’s people live. Then we saw the old mosque, the political prisoner Robert Sobukwe’s house, a First World War tank, the quarry where the prisoners worked and at the end we visited the prison. The guide told us that the prisoners were not allowed to talk to each other during the work at the quarry so they invented a way to communicate: they sang in their language, a native language the guards could not understand. Outside the prison we met a former prisoner who led us into it. We saw the kitchen where he had worked, the gardens, and the cells. He told us his story and what happened in the prison and in South Africa during the Apartheid. Even in the prison there was a social order based on skin colour: the whites ate more than the blacks; the whites were allowed to read while the blacks were not; the whites had the biggest prison cells and the blacks had the smallest etc, etc. He told us that in order to communicate with the other sections of the prison, Nelson Mandela, during the few moments of physical activity (tennis), put little pieces of paper with a message into the tennis balls and then he threw them into the other courts. He was very good at tennis. When we left the former convict gave us an apple box. It is the same box that was given to the prisoners when they were released. I was impressed by the size of the black people’s cells, they were too small. I was happy to visit that place because I think that iti s important to remember the things that happened there. 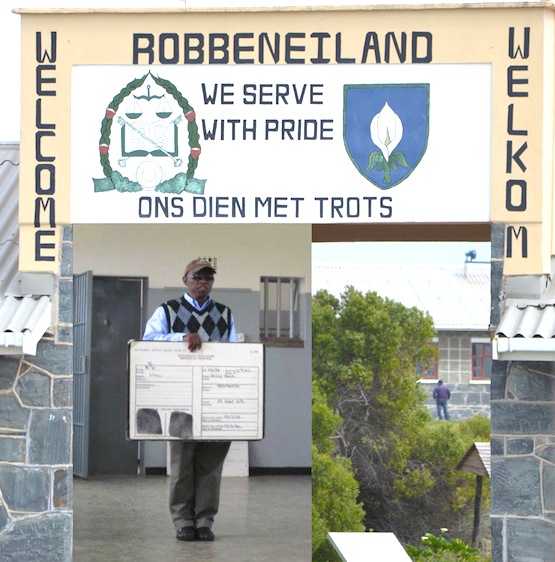